Shoppers given spy cameras inside their fridge

If you are someone who never remembers their shopping list then a camera inside your fridge could provide the ultimate solution.

A British supermarket is offering shoppers a new fridge that has a built in camera inside so they can see if they are running low on butter or milk while standing in the shop aisles.

The bid team was led by Trafficware’s exclusive distributor for northern California Western Pacific Signal (WPS) and replaces an older system. The new technology is scheduled to be deployed by late first quarter 2017.

“We are pleased to welcome Fremont into the Trafficware customer family,” explains Trafficware CEO Jon Newhard. “Trafficware has become the partner of choice for technology-savvy customers such as the City of Fremont and the natural choice for agencies looking to move to a more modern platform.”

The Fremont Boulevard Corridor is targeted for the latest deployment of adaptive signal technology in the Silicon Valley and San Francisco commuter area. The Corridor is a major arterial in the city that experiences drastic and highly directional traffic during morning and evening peak periods and more balanced traffic operations during the off peak periods, but also has swings in traffic volume due to nearby schools. Adding smart signal technology that responds to real-time conditions through this corridor will ease congestion and manage queues caused by traffic volume fluctuations.

Track & trace management software will be used to monitor and control sensor-connected 45ft reefer units operating in shortsea, rail, barge and road services throughout Europe, and during terminal storage.

“The temperature data is live, enabling instantaneous control over our reefers, whether they are awaiting pick-up or delivery, or moving anywhere in our logistics chain,” said Johan Vogelaar, Manager Multimodal Services – Reefer Trade, Samskip.

“Pre-trip inspections are straightforward and speedy, with the potential for human error minimized. Meanwhile, automated alarms warn of any potential risk of cargo damage ahead of time.”

Ireland is Sigfox-enabled for IoT

The two companies expect to connect over a million devices by 2017.

Remote nodes on Sigfox networks, which are low data rate and ultra-narrowband, are expected to run for over 10 years on two AA cells.

“Irish businesses and farmers have been quick to understand the benefits that the dedicated IoT network provides,” said VT Networks CEO Mark Bannon. “We look forward to launching programs that further integrate the network throughout the country.”

Earlier this year, VT held a ‘Sigfox makers tour’ in Dublin, a workshop based on a European tour (Sigfox is French) in which developers, makers and IoT start-ups get their hands on prototyping boards and the network to develop new applications. There is to be another in Dublin on 5th July, held with component distributor EBV Elektronik.

The National University of Ireland in Maynooth is setting up a VT Networks’ IoT academic program, where students will get free hardware, Sigfox subscriptions and licenses to ‘Sigfox-ready’ IoT platforms, said VT.

Sigfox claims to have >7 million devices in its network, across the world – claiming to have added 15 countries to its coverage map in the last year, planning to have >30 countries by the end of the year.

After France, Spain, Portugal, the Netherlands and Luxembourg, Ireland is the sixth European country to have complete Sigfox network coverage.

Why not try the New Smartphone APP to Control Your Alarm System or CCTV?

Why not try the New Smartphone APP to Control Your Alarm System or CCTV in Dublin?

Free Security Survey – Just email us your details to info@alarmsecurity.ie 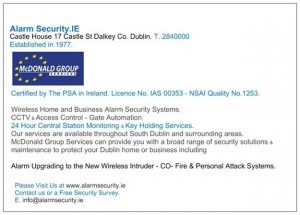 A mobile app is a computer program designed to run on mobile devices such as smartphones and tablet computers. Most such devices are sold with several apps bundled as pre-installed software, such as a web browser, email client, calendar, mapping program, and an app for buying music or other media or more apps. Some pre-installed apps can be removed by an ordinary uninstall process, thus leaving more storage space for desired ones. Where the software does not allow this, some devices can be rooted to eliminate the undesired apps.

For you new smartphone app – send us an email for an instant free quote!

McDonald Group Services lead the way in technology with the launch of their HKC Alarm Monitoring App.

The HKC APP enables the sending and receiving of commands, notifications, and alerts over GPRS & IP via the communication module of your HKC alarm system. 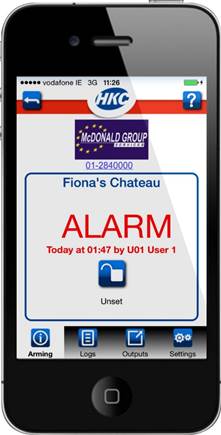 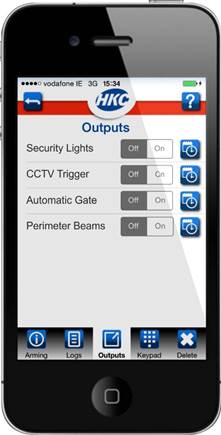 SecureCom is a cloud based solution for both Installers and End Users. Installers can connect to installations using any of the three new communication modules (GSM/GPRS / WiFi Card / Lan Card) and carry out Upload / Download or Remote Maintenance over the internet.